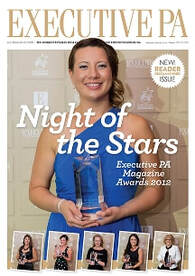 Brian Daniel is advertising on his website for an executive/personal assistant to work with a celebrity CEO – and he would prefer someone with “prior jet management experience.”

“This dream job,” says the ad, “will bring the candidate around the world because the position requires about 60% or more travel.”

As tempting as it sounds, the job is fairly standard for Daniel’s exclusive agency, The Celebrity Personal Assistant Network, which specializes in placing PAs and EAs in full-time positions with movie stars, business moguls and assorted billionaires.

Daniel promotes himself as “Headhunter to the Stars” and he has a message for Australian PAs: “I want to hear from you.” Contact details are on his website at www.findcelebrityjobs.com.

Daniel opened the agency in 2007, fresh from working in what could be the ultimate PA job: chief-of-staff to the Saudi Royal Family.

Today he places assistants in Los Angeles, San Francisco, Miami, New York, Las Vegas and Chicago, but he places his “candidates” with VIP clients all over the world [including Asia, the Middle East and Europe].

The hours can be tough, he says. But the rewards are fabulous. Salaries can soar beyond $150,0000 a year, plus year-end bonuses, luxury cars, first class international travel, five-star hotels and restaurants, and close contact with famous wealthy people.

Daniel is an enthusiastic and animated talker, with a hint of humor in his anecdotes. His interview with Executive PA lasts almost two hours. No amount of questioning can persuade him to disclose the names of his celebrity clients. There’s a good chance you see them all the time – starring in movies, walking the red carpet, accepting an Oscar or running a corporation. But the only way to identify a Brian Daniel client is by applying for a job through his agency and getting through to the client interview.

Why won't you name your VIP clients?

I have to sign confidentiality agreements. I would shake the confidence of the client by dropping their name. I have seen other agencies do this, and all of a sudden the lawyers are demanding payment, saying: “You are using our client's name to endorse your company.”

Nate ‘n Al is a famous deli in LA where all the movie stars go. I am sitting with the owner one day, and he is the grandson of the original owner, and I say: “You have all these huge stars come in here, so why you don’t put their pictures up on the walls?” And he says: “My grandpa told me: If you want to keep them in the booths, respect their privacy and keep them off the walls.”

I have formed alliances with people who run high-end outfits giving super exclusive services to the stars, and they all have the same philosophy – don’t use your clients to promote yourself.

How did you first become a personal assistant?

I moved to Los Angeles from the Midwest when I was 19. I had stars in my eyes and a strong work ethic. I started off as a personal trainer in a Beverly Hills gym, working with people from the entertainment industry, lawyers, publicists, some actors, but mainly behind-the-scenes people.

After a few years, I decided to get into hospitality and I was working the front office in a five-star hotel in Beverly Hills. You are literally dealing with presidents, kings and queens, dignitaries, major Hollywood celebrities and ultra-high net worth individuals; and that’s when I was introduced to a member of the Johnson & Johnson family and I started my first PA job. Later I became Personal Assistant and Estate Manager to Bob Corff, a voice coach to the stars.

There must have been defining moments for you when you realized the world of VIPs and celebrities was where you wanted to be. Is there one incident that stands out?

When I was working the front desk at the hotel in Beverly Hills in 1998, I saw Celine Dion standing right there in the lobby getting ready to leave for the Oscars to sing the "Titanic" theme song (My Heart Will Go On). This guy comes up to the front desk and asks to go into the vault.

​So I took him back there, and he pulled out this box and he is about to leave when he says: “You wanna see something?” Then he opens up the box and in it was the "Titanic" necklace, the real one, worth millions. He says: “I am about to go into the lobby and put this on Celine Dion’s neck. We just sold it for $4 million and as soon as she is done singing and comes off stage, I am going to take it off her neck and hand it to the new owner.” And that’s how I got to hold the Titanic necklace (Read more about Brian's story of holding the Titanic necklace HERE).

What was it like working for the Saudi Royal Family as an assistant?

To be a chief-of-staff for a royal family and live in the private jets and manage all the estates… it was a once-in-a-lifetime opportunity. I did that for about two years, working 18 hours a day. I could easily go three months without a day off, so the pressure was overwhelming. I could be with my boss in Miami, say, and he is with all his family members. These people travel in entourages and there are like 20 cars, and he says: “We’re going to Paris.”

​So something you would normally spend two months planning has to be done in two days, and it’s a logistical nightmare: organizing all the cars, the armed bodyguards, getting the hotel rooms, and you have to rent the whole floor of rooms. Then you have 200 pieces of luggage. I had to hire assistants who were just in charge of the bags. When you get to the hotel, you have a whole army of maids to unpack and iron everything. Someone has to organize it all, and that was me.

What gave you the idea to start your own agency for celebrity assistants?

When I finished with the Royal Saudi Family in 2007, I was dealing with a lot of high-end employment agencies [to look for my next personal assistant job]. The average employment agency is a factory – high volume and impersonal – and I thought there had to be a better way to do it. So when I started my venture, I decided to provide personal service to all candidates and clients and to specialize in assistance. As far as I know, there has never been a go-to agent for elite assistance.

How selective are you with clients?

I tell at least 25% of all employers who approach me that I am not the right headhunting agency for them. The average wage for one of my assistants is $80,000 but I have assistants who make over $150,000. High net-worth people have the money but they can be very thrifty. If they want an assistant worth $150,000 but only want to pay half that, then I politely turn them down.
​
Just as I qualify candidates, I qualify employers too. There is a famous doctor who contacted me. I did my homework on him and he had a lot of emotional problems – arrested several times, domestic violence, a whole list of things. It didn’t matter that he wanted to pay $120,000 year. I just can’t expose my candidates to that.

There are so many considerations. I am also a career coach and I’m all about my long-term respect in the industry, so I’ve often advised candidates not to take a job. I don’t want them leaving a really great job then getting fired from their new one.

What advice would you give to a PA in Australia who wants to work with VIPs and celebrities?

I want to hear from them. There are amazing opportunities for people willing to relocate. Almost half of the world’s billionaires are in the U.S.; but they are all over [the country], many in the middle of nowhere. There are only about 50 billionaires in New York and even fewer in LA. I get calls from these people [in the Midwest] and they say “there is no talent here”.

A lot of celebrities don’t want to be in the big cities. Harrison Ford is an example. Bruce Willis and Demi Moore got out of the city. A legend of the entertainment industry living outside of LA contacted me and was desperate for a certain candidate. “The job is hers,” he said. He flew her out there, wined and dined her, told her she could live in the mansion, have her own [Mercedes] car. She turned the job down.

It can be a delicate situation for people coming from Australia because sometimes there are issues with work visas and all of that. There can be ways around it, though. If you are a big CEO and run a vast empire and have estates all over the world, you can payroll someone out of some office overseas and it doesn’t matter.  When you look at the number of wealthy people, the opportunities for PAs and EAs have never been greater. The jobs are out there for the taking. You just have to be willing to make the sacrifices that are needed.

What process do you use to find the very best assistants?

Part of how I qualify candidates is their attention to detail. There is a protocol for applying. It’s on the jobs page of the website. Don’t attach a resume – paste it. Put this [info] in the subject line. I do it on purpose to see if they are reading the details. A person who doesn’t follow the instructions will stumble later. If you can’t handle all of those small things on the front end, then you will fall flat on your face at the back end where the big things really matter.

What tips can you give to candidates who have got through to the interview?

There are some tried and true gold nuggets that I always tell people looking for celebrity assistant jobs. First and foremost, it is hard to get these jobs but not as hard as you think because it is easy to outshine your competitors. Go the extra mile, be over-prepared for the interview, dress like a million dollars, don’t overdo it, don’t underdo it, rehearse your answers, show up to the interview early so you can get all the nerves and excitement out of your system and get focused.

​And make sure you have your parking spot. I have seen people miss the job because they couldn’t find parking. Walk in two minutes late and you don’t get the job. If you are on time, you are late. You have to be 10 minutes early. When you get down to those last five people, they are splitting hairs. So focus on what you can control.

How important is the rapport between a VIP client and their PA?

It’s everything. You’re married to them [figuratively]. You will spend more time with the client than they do with their boyfriend/girlfriend or spouse. They are going to be sharing their deepest, darkest secrets. Their whole lives are going to be in the hands of the assistant.

You must have seen things that would make a gossip columnist blush!

Oh man! I would never put names to what I saw when I worked at the [famous hotel] – the little trysts between already-married A-listers, the sneaking of people in through here and there [underground entrances]. You wouldn’t believe what I witnessed, and that was only the beginning.

​After I got into the Personal Assistant world and was behind the scenes a lot more with the employers, I was exposed to so much. I was with a VIP client and we walked into his house, and there was this major A-list actress there who the magazines had just done a big story on, complete with pictures of her and her husband and kids; and here she is cheating on her husband. 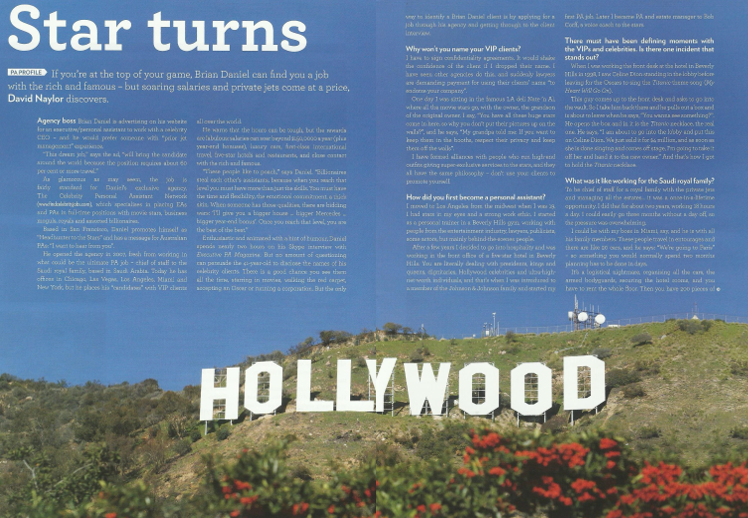