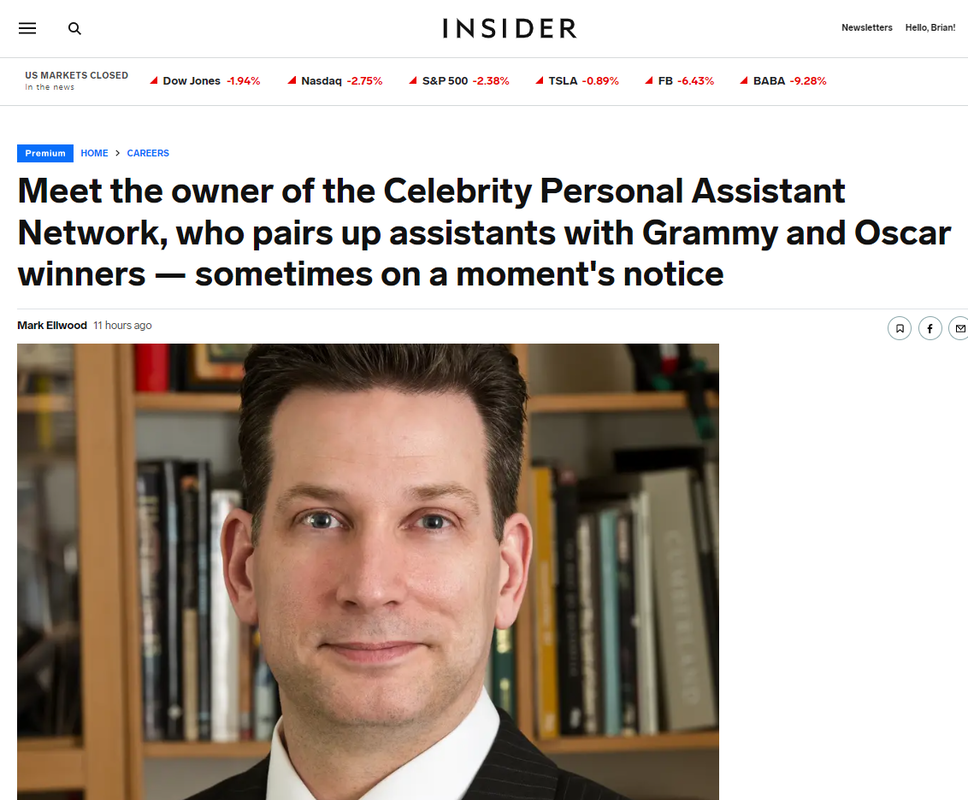 This article first appeared in Business Insider on June 9, 2022 (Premium subscription required)
Brian Daniel has run the Celebrity Personal Assistant Network, which pairs established personal assistants with high-profile clients, since 2007. But before he became an expert networker, Daniel spent a decade as a personal assistant for celebrities and other wealthy individuals.
​
Today, he typically handles around 50 placements a year and charges up to $25,000 — sometimes even more — to identify ideal candidates for finicky five-star clients. He shared how he got his start serving the wealthiest people in the world, and what led him to start his company.

His first encounters with celebrity clientele 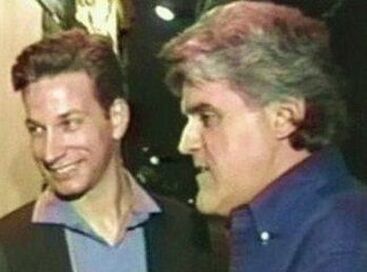 Brian Daniel & Jay Leno (1996)
Brian Daniel was working as a personal trainer in Beverly Hills when a client recruited him to become a PA.

Both roles, he said, require you to go "above and beyond the call of duty, and to go the extra mile." He said he was the trainer who was always willing to meet late in the evening, outside his typical working hours, or turn up last minute on a Sunday morning when a client needed an emergency workout.

He's seen his fair share of clients getting their way — no matter the costs — by simply dropping cash. Once, he said, one of his bosses demanded Daniel get him a private screening of a hot new movie within an hour. So, Daniel said, he drove to a nearby movie theater, took the general manager aside, and offered to pay him to cancel a show and for each of the 300 seats in the theater. "I suggested he put a sign on the door of one theater that the projector broke down so we could sneak the VIP in through the back, and he thought about it for a second then said, 'I can do that for you,'" Daniel said. 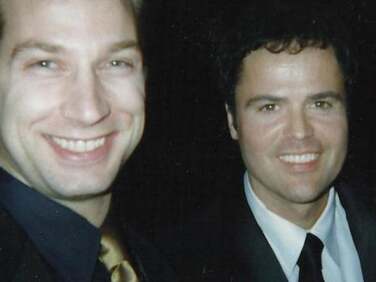 Brian Daniel & Donny Osmond (1998)
He had a similar experience with another boss, he said, who requested he get an In-N-Out Burger location to open up after hours. "I reached into my pocket and pulled out a huge wad of money and said, 'Give me a number right now, and I'll pay for all the overtime as well as a special gift for you,'" Daniel said.

Some gigs were temporary, he said, like the Oscar winner he assisted for the month leading up to the Academy Awards because their main PA was working 16-hour days and couldn't keep up. "Temps are very common during awards season to help with the extra work," he added. Other gigs last longer, often two or three years.
​
Usually, Daniel said, he would find new jobs via word of mouth. But after becoming exhausted by relentless gigs, he decided to chase opportunities through headhunters, delegating the search for a new position — and that's where he saw a gap in the market and a potential business opportunity. "I had such a bad experience with those headhunters," he said. "I decided to start my own company." Most staffing agencies that hire help for the rich, Daniel said, specialize in housekeepers and nannies, overlooking a crucial role personal assistants can play in a client's day-to-day life.  ​

Requests can come fast — it's his job to find a match 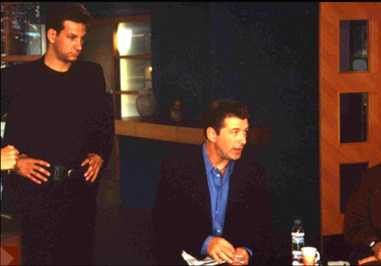 Brian Daniel & Alec Baldwin (1997)
Daniel said that key to his success is skillful screening: not only of candidates — to weed out gawking wannabes — but also of clients. "A lot of celebrities are very clandestine and might be emailing from a Gmail or Yahoo address," he said. "But espionage is rampant in this business — other agencies get people to pose as potential clients to figure out what I'm all about." Daniel will often research someone, sometimes by watching YouTube videos of them, before a scheduled phone call so he can verify that celebrity's voice; he might also suggest a video call for proof of identity.

Job briefs can vary wildly, and clients rarely put them in writing — mostly, Daniel said, because requirements for a role are often subjective and restrictive. "It's like Match.com, but for the professional world," he said. One early client, he said, ran through a list of attributes he'd like in a PA: blonde, blue-eyed, very athletic, and female. "I said, 'Would you like to tell me what skills she needs?' And I get people calling me giving me height ranges, hair color — they're often looking for young people in a certain age range," he said. Because of these kinds of requests, he said he tends to turn down 25% or so. "They can treat you like you run a modeling agency, and I make up an excuse that my plate is full right now when that happens," Daniel said.

He never knows when a job spec might come in. He said he once received an email (Daniel's website omits his phone number, so all new clients must contact him via email) at 8 p.m. on New Year's Eve from a Grammy winner who — for reasons she never explained — found herself without a PA at that very moment as midnight loomed. In response to the client, Daniel requested a video call, per his protocol. "It rang, and I was so nervous my heart was going to explode out of my chest," he said. "She was there [a Grammy-winning star on my video chat]. I couldn't believe it." Within 20 minutes, he called her back with a candidate, whom she hired on the spot — and who continued to work for her on an ongoing basis.

His best candidates, he said, have what he described as a "service heart," or an instinct to go above and beyond. An ability to remain unflappable under pressure is also vital. "Generally speaking, in this industry, everything is done with extreme urgency and always at the last minute," he said, pointing to the legal tussle between Lady Gaga and her former PA — which the singer settled out of court — as a cautionary tale that justifies his finicky process. "She had hired her best friend to be her personal assistant, and you need a PA with a level of business acumen," he said. "You need three strong recommendation letters from the last three employers that show you have the skills and the personality."

He charges up front to avoid wasting time 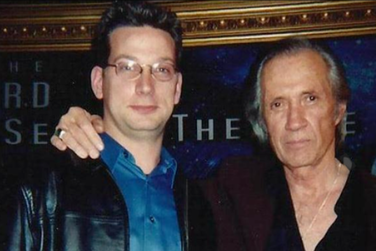 Brian Daniel & David "Kill Bill" Carradine (2003)
Daniel quickly learned how to make his search business viable. Often, he said, a celebrity might have an off day and fire someone on a whim, then a week later change their mind. Any commission-only headhunter would be left having to pay the PA out of pocket in a situation like this, so Daniel refuses to operate this way. Instead, he charges an up-front fee.
​
The amount varies depending on the job specs, he said: For a straightforward placement, like an LA-based gig paying $80,000 as a celebrity assistant, he'll charge 25% of the annual salary, billing $5,000 to $10,000 up front to cover his expenses and confirm it's truly an open role.

He incurs more overhead than many traditional headhunters, he added, as background checks are even more extensive when working with VIPs, from criminal-record research to references from previous A-list employers.
​
His fee might rise for more complicated briefs, such as a request looking for someone with a master's degree and fluency in several different languages, or someone in a less desirable locale. He said he's struggled to fill well-paying jobs when they're based in the Middle East or the Midwest, and so he levies a higher fee for his time. With new clients, he also offers two one-hour phone consultations free of charge, where he and the client have an in-depth discussion about a particular role. "If you need some coaching to help really define it, I charge $300 per hour after that," he said.

The pivot during the pandemic was personal for him 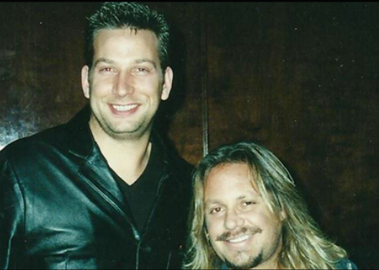 Brian Daniel & rock star Vince Neil, Mötley Crüe (2000)
Daniel said that the pandemic had a major impact on his business — many clients laid off household staff, including PAs, and his business slowed. "Generally speaking, the domestic-staffing industry was hit really hard [at the beginning of the pandemic]," he said. When a detailed job spec came in from a billionaire and he worked on it for weeks without finding the right candidate, Daniel offered to tackle the role himself while he kept his search firm in business by partnering with other agencies when briefs for new roles arrived.

He spent six months as the majordomo (elite business manager) to a globe-trotting man while overseeing a quartet of other assistants. Once, he said, they were standing in a rented villa on the Riviera Maya when his employer suddenly decided he fancied going diving in Cozumel. It was peak vacation season, and everything was booked solid all summer. But four hours later, after what Daniel described as a marathon of calls from the kitchen table, he had booked the trip. "We found a yacht, a captain, got the Jet Skis and all the stuff we needed," he said. "That was a great example of the kind of resilience you have to have in real time."
​
Daniel replaced himself in that role four months ago with another candidate after the search business began booming again. "Everything has come back. It's been like an explosion," he said, adding that almost all job specs now include requirements to have received a COVID-19 vaccination and booster. "People really need someone to manage their lives more than ever: the boats, the private jets, the mega-mansions. You can buy your way out of a lot of problems."
BACK TO PRESS PAGE >>
Additional links and photos were added to this article for our platform