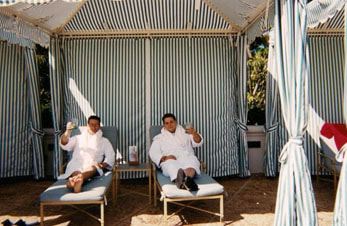 Celebrity PA job perks
Brian Daniel has worked with A-List celebrities, high-net-worth families, and even royalty as an Executive Personal Assistant. He now runs his own celebrity assistant company called The Celebrity Personal Assistant Network, which places candidates worldwide. You can visit his website at www.FindCelebrityJobs.com

How did you get started as a celebrity personal assistant?

For the first 10 years of my professional career, I was in the corporate world, mainly in retail management and the hospitality industry (famous 5-star hotels). After a while I realized that most corporate jobs, no matter how prestigious they look on the outside, are somewhat of a dead-end career. Rather than dealing with the general public, I wanted to move into working with Private Family Offices. Since I had so much experience being around celebrities, I figured it was time to make a move to working with them.

Through some friends I had known a famous vocal coach in Hollywood, and I thought it would be a good idea to get my foot in the door by working with him. I did my homework and learned he did not have an assistant at the time, so I kind of stalked him – professionally speaking of course. After I had my attack plan in place, I contacted him and explained why he was losing money by not having me as an assistant. He absolutely agreed and hired me the next day. In fact, I was so valuable to him that when I asked for a 30% raise just one year into my tenure, and he gave it to me without a second thought.

How many stars did you meet when you worked for the famous voice coach?

I can’t count, seriously, that many. Almost every day some big name came into the studio. I can’t say I was ever sad while at work. Because he (the coach) worked with so many different kinds of talent: TV and movie stars, sports figures and other personalities, I met the whole cornucopia of talent.

Any favorite celebrities that you met as a PA?

I don’t like picking favorites, but I really enjoyed meeting say many different kinds of talented people.

How did you start working for the Royal Saudi Family?

About three years into my job with the voice coach, I decided it was time to move on. I had pretty much done everything I could do there, and my boss was very supportive of me doing something else.

I did some homework and found a connection to The Royal Saudi Family. To make a long story short, I went through a long battery of tests, background checks, etc., and was finally approved.

What was it like to be an assistant to a royal family?

It’s hard to describe it, but picture this: my first day of work I had to fly from Los Angeles to Chicago to meet my boss (for the first time). I navigated my way through Chicago O’Hare airport and met up with him in the afternoon, then we hopped on a large jumbo jet and headed for Paris.

Let me tell you this: first-class is totally different overseas. It is so luxurious, that it makes U.S. carrier first-class look coach seating. My boss and I practically had this hotel suite with giant Lazy Boy-like chairs that had their own television sets. I later looked at the bill for the trip and it was $20,000 each for the tickets.

What kinds of duties did you have while working for the Royal Saudi Family?

Because I was the Executive Personal Assistant, my duties had a lot of depth and breadth. I was in charge of other subordinate personal assistants, and I was the senior Estate Manager. My duties included by were not limited to hiring and firing staff, exotic car management, personal and professional itineraries, and being a liaison to diplomats as well as other princes and princesses in the family.

Are all the stories true about the whirlwind shopping sprees?

I had to sign a very thick confidentiality agreement before I started working for my boss. But even if I hadn’t, I still can’t tell you much about the people I worked for. Celebrities, high-net-worth families, and the royals are very particular about their private lives. I can say that, yes, a lot of spending occurred. Being on private jets, driving Ferraris, and having $10,000 bottles of wine at dinner really rocked my world. It was a once-in-a-lifetime experience and I’m glad I did it.

Why would you quit a dream personal assistant job?

After nearly two years of duty, I just decided that it was time to go off on my own. I really appreciated the opportunity, but you have to understand that working 12 to 14 hours a day, 7 days a week for months at a time really gets to you. There were times I thought I might have a nervous breakdown. Not to mention, being in a new country every week was exciting, but also a chore. I guess I just got homesick.

If you’re interested in learning more about Brian Daniel’s adventures, check out his website for photos, stories, and job postings at www.FindCelebrityJobs.com.
​READ MORE LIKE THIS >>