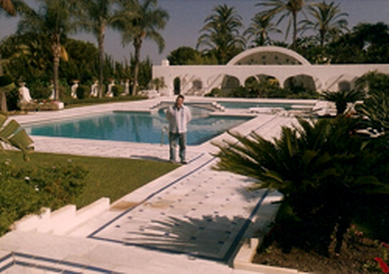 Brian at a Saudi Royal Palace
​If there ever was a time that I got to relax a little, it was when we stayed at the Royal Palaces. In addition to private homes, The RSF owns palaces that they share with other members of the extended family. In a way, the palaces are like private hotels for the family; a reservation is required, and they are fully staffed. That fact really took a tremendous weight off my shoulders because the security, cars, food, and everything else was already in place. In Paris, for example, this allowed me a little time for sightseeing.

If you ever saw the George Clooney/Matt Damon movie named “Syriana,” you’d know that the Saudi Royal Family likes Marbella, Spain; yet another location of a palace I visited.  I rather enjoyed that stay because Marbella is like a European-style Beverly Hills of sorts, except on the beach – nice!

If you ever get the chance to work for the RSF, here is a short list of other traditions and customs you may consider:
​ ​
Although I did act in many business capacities for the Saudi Royal Family, my job was primarily what we refer to in the business as “Lifestyle Management.”  On that note, let me address some of the typical definitions that are often used in this business.