Surviving the Back-biting & Colleague Sabotage That Comes with the Job 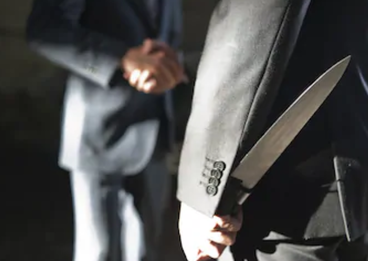 PA Tips: Avoid backstabbing & betrayal
​I’ve made some references already that pertain to how your coworkers will try to outshine you whenever they can, but I would now like to tackle this subject head-on.  From the word go you need to know that there may be insidious evil all around you when you’re working with celebrities and high-net-worth families.

If history has taught us one thing it’s this: There will always be a Judas or Benedict Arnold in your midst.  Being an assistant is like being on the TV show Survivor, except on steroids.  There are alliances and conspiracies everywhere around you, and it’s going to be your best friend that puts the knife in your back.  Like Judas, they may even give you a kiss on the cheek while doing it.

In fact, the phenomenon of betrayal in the workplace has become so prevalent, I’ve seen professional studies and documentaries on the subject.  It does happen in regular office environments as well, but it’s much more pervasive in the world of the super-rich.  If you are the right-hand to the VIP, everyone is going to be envious of you.

Perhaps, even people that are not competing directly with you will be jealous.  For example, if you work for an A-list celebrity, they have an army of people that work for them: agents, managers, publicists, stylists, etc.  It’s not unreasonable to conclude that some of those people may be envious that you get to spend so much time with the star.  I know because I’ve actually had people tell me in secret that someone from their office was plotting against me.  The first time I heard this I thought the man was kidding.  After some careful research​, I found out he was right.  The strange thing: I had never even met the person who hated me.

I never knew how truly evil people could be until I started working for the rich.  Sabotage and betrayal are often the order of the day.  Colleagues will deliberately set you up for failure because they want to look good for the boss.  These facts are the bare-all, seedy underbelly of the business that is rarely talked about by anyone.

I feel compelled to mention this “dirty laundry” subject because if you don’t go in prepared, it can and will catch you off-guard.  When I was working for the Royal Saudi Family, I had one of the drivers – who was an aspiring assistant – working diligently behind the scenes trying to undo all my work.

At every turn he was planning a way to take my job.  Here’s the real kicker: I had taken him under my wing.  I helped him in every way that I could because I’m a nice guy and that’s what I do.  He took that as a sign of weakness and decided to turn against me.

​I want to be clear that I don’t want you walking around the job in a paranoid state.  Give your colleagues the benefit of the doubt and assume that you are all part of one team, but BE CAREFUL WHILE YOU DO IT BECAUSE THINGS CAN HAPPEN.