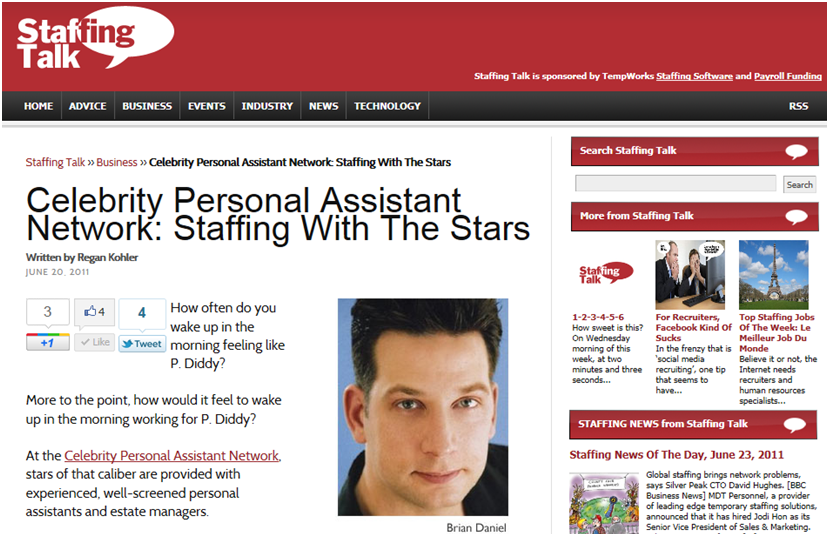 Headhunter to the Stars in "Staffing Talk"

How often do you wake up in the morning feeling like P. Diddy?

More to the point, how would it feel to wake up in the morning working for P. Diddy?

At The Celebrity Personal Assistant Network, stars of that caliber are provided with experienced, well-screened personal assistants and estate managers.

The advantage of the agency’s success comes from its founder, a veteran celebrity assistant who knows exactly what they’re looking for.

Brian Daniel has 20 years of experience working with “high-net-worth families and VIPs” in Los Angeles. He started as a celebrity personal trainer, and later moved into hospitality, working for the legendary Pink Palace (the Beverly Hills Hotel & Bungalows on Sunset Blvd and Rodeo drive).

“I’ve always been around high-profile entertainers,” Daniel told me.

His big break came when he got the opportunity to be a part-time PA for a very famous family, and then got a full-time job as executive personal assistant to the Voice Coach to the Stars.

Daniel said, “It was the opportunity I had always been waiting for. Finally, I had the chance to focus all of my attention on one person, my boss.” While working for the voice coach, it was like a full-time Academy Awards red carpet for Daniel because of all the stars that paraded in and out, and it eventually led to a two-year gig traveling the world as an executive assistant for the Saudi Royal Family.

It wasn’t easy, though. Jet lag notwithstanding, Daniel said that each new country they visited meant a new challenge. An assistant has to have a local connection when it comes to things like setting up drivers, appointments and other necessities in a foreign country.

In a job like this, just any travel guide isn’t going to cut it.
​
“People with high net worth, they’re jet set,” Daniel explained. “They’re always in a new place. I had to start from scratch every time.”

He needed his entourage of personal assistants to help him.

“When I decided to start my own staffing agency, that was the catalyst,” he said.

You wouldn’t expect a city like Los Angeles to be lacking in agencies providing personal assistants and domestic staffing to the stars.

“They’re like gas stations,” Daniel told me. “They’re on every corner.”

The PA staffing agencies Daniel found had “jack of all trades” format – they provided not only assistants, but maids, nannies, security, party entertainers, dog walkers, etc. Many of those high-volume operations have to hire temporary employees and college interns to work in a fast-paced environment.

Many of these people don’t have that specific skill set to handle a celebrity’s needs, Daniel said, and high turnover rates at the average employment agency don’t exactly win over a celebrity.

“I don’t act as a temp agency,” Daniel said. “In my mind, it’s impossible to give candidates and clients the attention they deserve when the [average domestic staffing] agency has thousands of clients in their database. The whole system is broken.” For someone like Daniel, a highly driven and enthusiastic individual who won’t let a little thing like the economic recession stop him, it was crucial to “recreate the wheel.”

Since its 2007 inception, Daniel’s agency has focused on giving both the client and candidate the respect and attention they deserve.

Being a celebrity assistant requires unprecedented levels of responsibility, and extreme credibility. Daniel likens his database to Match.com, professionally speaking. The client and candidate need to have a professional connection.

The heightened level of security in working for a VIP means even more restriction in background checks. In other words, anyone dreaming of a “Devil Wears Prada”-style job need not apply because PAs will have access to the most private aspects of celebrities lives.

This doesn’t include the intensive screening process and re-interviews the candidate has to go through before hiring. The box isn’t banned in Hollywood, or the other regions the agency serves (Las Vegas, San Francisco, Miami, Chicago and New York -- just to name a few in the United States). He also makes places worldwide.

I was curious as to how one recruits for this level of personal assistant jobs. I’m sure, as a nosy journalist, my resume would go directly into the circular file, and I somehow doubted job boards or social media will filter out the type of person the agency is seeking.

“Everything is basically word of mouth,” Daniel said, or through his website. He does not advertise. Most of the referrals come from existing candidates.

This is why his company is a boutique agency. “It takes a very special kind of skill to understand” the celebrity lifestyle and needs, he said.

One of Daniel’s newer celebrity clients had been hunting for the right PA for two years, going through every agency on the East and West coasts. They were firing the assistants almost as soon as they’d hired them; no one could manage to provide the right level of experience. When they finally reached Daniel’s agency, he had four candidates ready within a week.

Amazingly, Daniel says he’s never had to replace a candidate. He has a 100% success rate, and the business’s continued growth means he can increase candidate standards because they are so experienced.

It’s a lucrative job for the assistant. Daniel won’t let a client pay an assistant less than they’re used to. He has seen PAs get put “through the ringer” at other agencies.

When I spoke to Daniel, he was preparing for a trip to Chicago, immediately followed by a jaunt to Jordan. He still “puts on the personal assistant hat” from time to time, and is always available when a client specifically requests his own services.

Take this, for example: One New Year’s Eve, a Grammy-winning musician lost her Personal Assistant, and Daniel was able to provide her with a new one in an hour flat. The PA ended up working for the musician on a long-term basis.

Daniel eschews becoming a celebrity himself. Last month, a TV producer approached him about turning his work into a reality show. Daniel turned it down.

This is just one example of the calls he gets constantly, but Daniel is in no way willing to breach the privacy and credibility of his agency, clients and candidates.
​
“I don’t ever want to take a gossipy slant,” he told me. “I stick to my guns.”

​This article originally appeared on StaffingTalk.com and updated in 2022
BACK TO PRESS PAGE >>