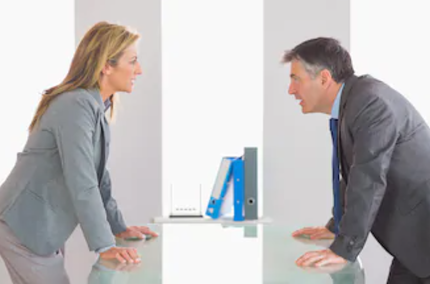 Handling difficult people
Time and again, you are going to find yourself in situations where a disgruntled person may hold your job’s future in their hands. On some days it will seem the universe is conspiring against you because when you least need a headache, some strange situation is going to arise.

I was on an assignment once and a potential disaster was coming at me head-on, like a runaway freight train. My celebrity boss was going to an award show, and the shirt he needed was at the dry cleaners. I went to pick it up and, behold, they could not find the shirt.

It was important that he wear that specific shirt because it had already been picked out to go with his suit, which also complemented his wife’s dress. In short, an army of publicity agents who carefully crafted that night’s photo ops would have been furious if I didn’t come through. Not having the best-looking photo possible, perhaps, could cost a celebrity their place in that week’s pop culture magazine. No pressure in this situation, right?

The attendant behind the counter was almost impossible to deal with. She was new, so I did not have any rapport with her. Maybe she was having a bad day; I don’t know. But I do know that she did not even want to budge to help me. I thought back to my days of dealing with rude assistants at my previous hotel job, so I tried to handle this situation with kid gloves. People being rude to me didn’t make me want to help them, so I’ve always remembered that philosophy when I felt like I might lose my cool with someone else.

When you're in this kind of situation, take the following steps:

​To the letter, I used the aforementioned steps to solve my problem at the dry cleaners. After some careful and calculated talking, I got the person on my side. She went to the back of the store and as it turns out, the shirt was ready but had been put in the wrong place. Now, if I lost my cool and started giving her the nonsense about being “powerful” and that I may “get her fired,” then nothing would have happened. I only would have left the dry cleaners without the shirt and, perhaps, would have lost my job.

By the way, many people don’t even care that you work for a celebrity or VIP, so I don’t ever tell them that kind of information. If anything, it may hurt you. If the person you’re dealing with thinks you’re rich, then they may want you to shell out a bunch of money before they will help you. In effect, they will hold you hostage.

That often happened when I was with the Royal Saudi Family because it was impossible to ignore that I wasn’t part of an elite crew. When people see you get out of a chauffeured Rolls Royce that’s part of a motorcade and security agents around you are talking into their sleeves like Secret Service agents, it kind of blows the “try to be inconspicuous” tactic.

As far as trying to assert your power goes, there have been a number of times I saw celebrity assistants get thrown under the bus for saying things like “do you know who I am?” In short, many people don’t care that you work for a celebrity because it’s not going to make their lives any better. You may just get yourself fired and put your boss on the front page of the tabloids.  Do I need to say any more?