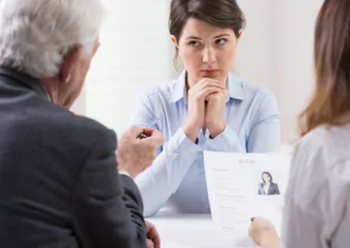 Interviewing strategies
​One thing often not talked about is how brutal the interview process can really be.  Some experiences will be event-free, others will be awful.  Sometimes the process is short, just one or two interviews; other times you may have five or six interviews. The whole process is primarily designed to see if you have the stamina to make it to the end.

If you start by going through an employment agency, they will likely be hard on you because they don’t want to blow their future relationship with the VIP by sending them someone that’s inadequate. They really need to know that you have “the chops” to be an outstanding personal assistant. Once you jump through all those hoops with an agency, it starts all over again when you meet the actual employer’s hierarchy.

Each and every person you interview with is going to have a certain level of fear and jealousy about you. The fear they have is very real because they believe you could be the next person that takes their job. Additionally, they may be jealous of you because if you’re interviewing to be the right-hand for the VIP – whoever that may be – perhaps it’s something they wanted to do but were passed over. This happens a lot.

You may be saying to yourself that this is all unfair and you’d be right. Life isn’t fair, but I have yet to meet someone – even outside of the entertainment industry – that doesn’t deal with some level of office politics and back-biting. It’s just that in my business there is a heightened awareness of it, so you’ve been warned.

When in the interview, always have a “can-do” and optimistic attitude. There is a fine line. You don’t want to be too serious because they need to know you’re a likeable person, but you don’t want to be too comfortable either. This is very frustrating for the interviewee, so just play things by ear when you’re in the room. Maintain the appropriate amount of eye contact and nod your head “yes” when being spoken to so that the interviewer understands that you understand.  Above all else, smile.

It is very important that you ask questions. When you do, it lets the interviewer know that you’re a business professional and that your visit to their office has been well thought-out. If you’re overly anxious and agree to everything at the drop of a hat, it makes you look too eager. The psychological warfare I mentioned earlier is something I also call the “nightclub syndrome.”

In Los Angeles, club owners put up a velvet rope and tell people they can’t come in: “You need to be on the list.”  Of course, we know what happens. It’s the classic take away close that car salesman are famous for. It makes people want to go into the club. This strategy may help you in an interview.

Interviewing is a two-way street

​If the interviewer sees that you have your act together and are well-spoken, it obviously helps you. They will know you are in the process of deciding who you’re going to work for, so they may make you an offer quickly because they don’t want to lose you. Remember, you are interviewing each other because it’s a two-way street.

I have spoken to many A-list movie producer friends of mine who have used the same strategy to close multi-million-dollar deals with major studios. They pretend that they have other offers, even when they don’t, so that the urgency is raised.  One producer told me that a studio boss wouldn’t let him leave the room until he signed a contract. In the end, it all depends on how badly the employer wants you.