While some celebrity assistants have become famous because of the actor that they work for, Brad Pitt's personal assistant has largely been off the radar these days. Years ago, there was wild speculation during the filming of World War Z that a PA: Production Assistant was an "item" with Brad. Let us clear things up right now.

When actors film movies, there will often be PAs -- production assistants -- that are employed by the producers of the movies. They assist many of the cast and crew while on location. Just because Brad was spotted with a production assistant doesn't mean a thing.

Does Brad Pitt bring his assistant with him on location? 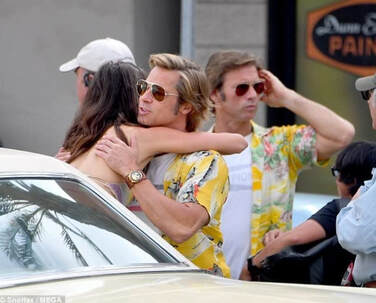 Double: Assisting Brad Pitt on location (IMDb)
Big stars like Brad Pitt often employ more than one personal assistant. Some stay in Los Angeles, while others may travel on location to work on a movie set with the actor. If the production is high budget, then the executive producer may hire a local assistant to work full time with an A-list actor like Brad Pitt. That way he won't have to drag his main assistant with him wherever he goes.

Who else assists Brad Pitt?

A man by the name of Rob O'Malley also assists Brad Pitt. The pair have worked together on such films as Once Upon a Time in Hollywood, Ad Astra, and Bullet Train. PAs that assist stars like Brad Pitt on the set can do a number of different jobs: stand in, gofer, stunt double, etc.

Who else does Brad Pitt employ domestically?

When celebrities become big stars and buy large mansions, they need to hire a number of different types of domestic staff: assistants, gardeners, nannies, chefs, private security, etc. Here is a video that shows the level of dedication it takes to be a nanny to an A-list couple.