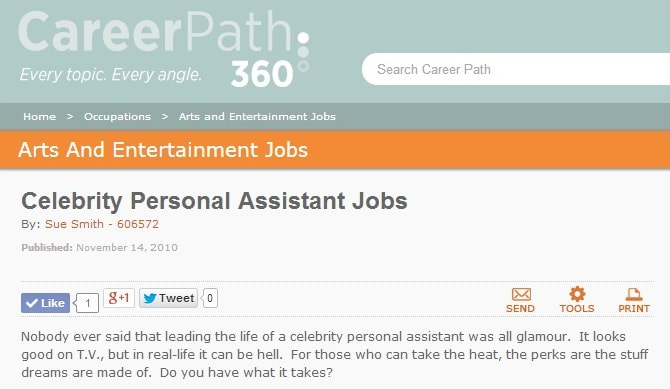 What it's like to be a celebrity personal assistant

​Nobody ever said that leading the life of a celebrity personal assistant was all glamour. It looks good on T.V., but in real-life it can be a lot of heartache. For those who can take the heat, the perks are the stuff dreams are made of. Do you have what it takes?

Brian Daniel, a celebrity personal assistant in Los Angeles, says that finding the right celebrity boss is like finding the right spouse. Some matches are made in heaven and some are not. It is, as most assistants say, exactly like a marriage. “The assistant becomes part of his or her boss’s life. You spend a lot of time together and there are going to be fights. The only thing you can do is develop a very thick skin and roll with the punches,” insists Brian.

Not everyone can make it as a celebrity personal assistant, but the ones who do brave the storm have a lot to be happy about. For example, above and beyond the handsome salary, there are the private jets, limos, gifts, and year-end bonuses. “I’ve really learned that someone can make a career out of this,” says Brian. “Being unemployed is virtually impossible once you prove yourself indispensable.”

​One should not underplay the fact that being an assistant to Hollywood’s elite is not without its drawbacks. Most assistants report that the hours and pressure are grueling. Being humiliated and embarrassed is often part of the territory. In fact, for this profession it’s a rite of passage.

Mr. Daniel reports that even the most qualified candidates, academically speaking, simply don’t make it because they aren’t willing to make the sacrifices that come with the job. The very long hours - usually twelve hours a day, six or seven days a week - are what separate the charlatans from the pros. “As far as a personal life goes,” Brian says while rolling his eyes, “forget about it!  Your life is the job and that’s it.”

Some celebrity assistants have even turned their career into a great opportunity. Most notably, Madonna's former assistant started her own company. Al Pacino's longtime assistant eventually became a producing partner in some of his movies. In short, with this profession, the sky is the limit.
BACK TO PRESS PAGE >>